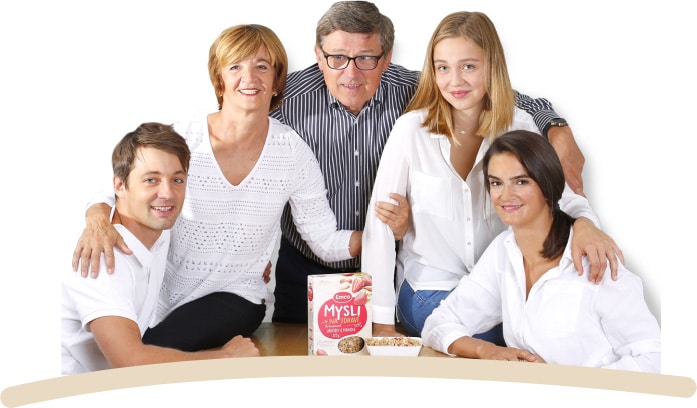 EMCO is a family business situated in beautiful countryside outside Prague in the heart of Europe. Ever since it was established in 1990 it has been managed by family members who put their passion and dedication into producing natural healthy EMCO products.

„I taste each product and I´ll never let you have anything I wouldn´t be proud to give my own children and grandchildren. Knowing that all of us here at EMCO have brought you and your families honest-to-goodness products over the past 25 years gives me great personal satisfaction.“

When I hear that a mother who used to have our breakfast cereals as a kid is now giving them to ger own kids, that´s the trust I don´t ever want to fail“.

How it all began…

Emco company was founded by Zdeněk Jahoda in 1990.

At the beginning Emco was engaged in exporting and importing of various food. Czech consumers meanwhile took the greatest liking to cereals, which until then had been practically unknow on the Czech market.
2

The first cereals were being produced and imported from Germany under German brands.

It was in the year 1994 when the brand Emco appeared on the Czech market. Name Emco being a compound word of „Em“ (pronunciation of the letter M, after his son Martin) and „co“ (as a company).
3

Since 1998 Emco makes its own products in the Czech Republic,

Zdeněk Jahoda started baking the first muesli in an ordinary kitchen oven. In these days a production is professional. The oat flakes come from Czech farmers and are processed in Emco’s own mill in southern Bohemia.
4

Today Emco is a leader on the domestic market and exports to more than 50 countries all over the world.

During time more products were added to the Emco portfolio – oatmeals, biscuits, bars and others.

Our mission is to make your breakfasts and snacks
healthier and tastier.

Become a member of the EMCO club

Cookies defined in this category are critical to the functionality of the site. For this reason, they are always active.

Analytics cookies help us determine how visitors interact with the site, the number of visitors, origin they come from, and the pages they visit. The tracked data by these cookies are anonymous.

Advertising cookies help us provide our visitors with relevant ads and marketing campaigns.

Cookies are used to store user preferences. It is then possible to provide customized content based on this data.